William E Roach OBE
172 Battery, 58th Light Anti-Aircraft (LAA) Regiment Royal Artillery (RA), during April 1945 when his unit was one of the first to arrive at the concentration camp at Belsen.

Providing a factual account of the scenes which greeted him and the many problems with which he was confronted as the British officer responsible for the initial administration of the men’s camp (from 15 – 19 April 1945, when 113th LAA Regiment took over), with particular reference to the provision of food to the prisoners, and the various national groups with whom he had to deal; appended to the memoir are copies of relevant documents, including a note on the role of 58th LAA Regiment in the liberation of Belsen camp, and details of ‘breakfast rations’ issued to the various national groups in the men’s camp on day two of liberation.
IWM record

Additional Info
Liberation came to Belsen on 15th April 1945 as British forces of 11th Armoured Division passed through the area in their drive north. The task of taking control of Camp No. 2 fell to 58th Anti-Aircraft Regiment and acting Captain W E Roach commanding G Troop of 172 LAA Battery. He and his men were escorted to No. 2 Camp by a Captain of the Hungarian Army whose troops were left behind by the retreating Wehrmacht to guard the prisoners.

“We had been prepared for much; but not for the scene which greeted us. Two pitch battles were taking place. The first in the square between the huts immediately in front of us , which was full of men fighting with sticks or any weapon they could pick up. Not knowing what was going on I ordered my jeep-driver to go straight at the melee. He did so slowly and I stood shouting and waving my revolver, followed by Lt. Pickard putting on a similar performance in his jeep and the six guns, the crews brandishing their sten guns. The fight broke up, leaving a number of dead, injured on the ground, and, taking care to avoid the bodies, we placed ourselves between the combatants. I made a short speech, saying that we were British troops, come to free them and that we would do our best for them, but that we would stand no nonsense and have no disorder. As I spoke in English I didn’t suppose a word was understood, but our gestures seemed to put over our meaning and the groups slowly dispersed back towards their huts. Later we found out that it had been a Polish-Russian fight.” (Lt. William E Roach, 58th Anti-Aircraft Royal Artillery: The First Four Days in Belsen)

Captain Roach’s first task was to make contact with the SS administration and the camp commandant Franz Höessler*. He found them, not surprisingly, barricaded in their barracks fearing for their lives. 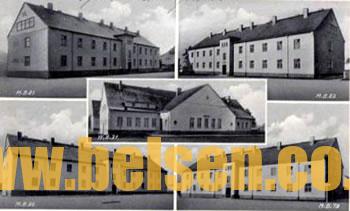 “Having cleared the area I went in to meet the SS camp administration. There were about 30 of them as I remember. As they had been in fear of their lives they were glad to see me. It shortly appeared that their fears were not groundless. One or two, who had not succeeded in reaching shelter in time, were lying dead between the huts together with the bodies of several German prisoners. This was an unexpected complication. In addition to the SS guards there were two groups of Germans in the camp. One group were criminals who were serving their prison sentences in Belsen. Very serious offences as we found, such as manslaughter or robbery with violence. They acted as a sort of under-warder and were as hated as the SS themselves. The other group was made up of German political and Jewish prisoners who were no better off than the other inmates.” (Lt. William E Roach, 58th Anti-Aircraft Royal Artillery: The First Four Days in Belsen)

The prisoners were very weak but overjoyed at being free. They came to stare at their liberators and for a short time they had forget the past horrors that had befallen them, even the Kapos were not given a thought. However, as liberation began to sink in, so did thoughts of revenge. Over the next day or two the Kapos were rounded up and killed by the prisoners.

In those couple of days it has been estimated that between 140 and 160 Kapos were stoned or violently killed in Camp No.2. “In 1953 Dr. Kurzke, the same SS-doctor who is also mentioned by Paul Trepman in his report, wrote a letter to the “Gemeindefreier Bezirk Lohheide”, the local community, where he stated that shortly after the liberation of Camp II altogether 140-160 former Kapos were killed by other inmates.” (Communication from the GedenkstätteBergen-Belsen). As for Kapo August, well he disappeared for a few days but was eventually discovered hiding in the cellar of one of the WB blocks by some Russian Prisoners.

“His two Russian captors would not let anyone lay a hand on their precious find. Instead, they led him into their barrack – No. 69 (MB 69). There, they politely asked him to strip. When he stood there stark naked, with thousands of eyes piercing his body, his face took on a waxen hue, and his hands began to shake. The foxy little eyes had become humble and pleading. That was the way we had wanted to see August, and the sight was balm to our eyes. One of the Russians ordered him to lie down on the floor. August obeyed without a word. Then, first the Russians and, after them, all others, began to pelt him with rocks and stones. No one tried to beat him, or kick him; they simply threw stones at him until the blood spurted from his nose and mouth. It was an act of primitive justice – Kapo August was stoned to death by men who had been sustained by one desire; to take revenge for their dead comrades and for their own shattered lives.” (Paul Trepman: Among Men and Beasts)

The bodies of Kapo August and his fellow Kapos were taken from where they were slain and were interred in a mass grave dug in a quiet spot not far from the blocks of Camp No. 2. The cemetery is located behind MB 90 near to what is now the cricket ground. A wooden gate opens into a small piece of land surrounded by hedges, fir and silver birch trees. The grave itself is now covered with heather and various other plants of the area and only the three headstones give a clue as to what lies beneath. Such a peaceful scene,makes it hard to believe that beneath the soil should lie the remains of those who all those years ago, wreaked so much terror on their fellow prisoners.

CAMP 2
**The Czechoslovakian Committee was made up of liberated prisoners who had been taken to the Bergen-Hohne barracks on evacuation transports from the Mittelbau-Dora concentration camp in April 1945. At the time of the liberation, Camp 2 of the Bergen-Belsen concentration camp held more than 15,000 prisoners, all of them from Mittelbau-Dora.
Bergen-Belsen Memorial