Rosalind Venetia Pitt-Rivers is best remembered for the discovery of the thyroid hormone triiodothyronine, which earned her worldwide recognition. 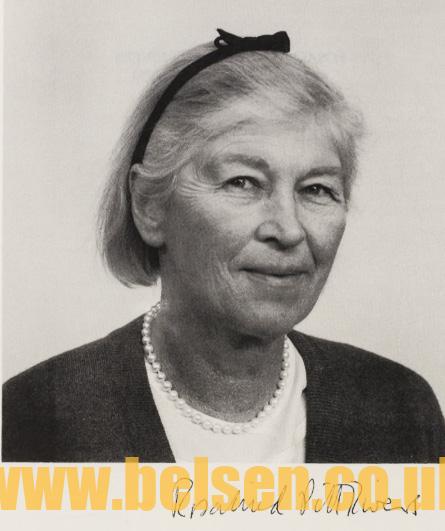 Towards the end of the War in 1945 she was seconded to the 21 Army Group to go to Belgium. There she joined Dr Charles Dent, and Dame Janet Vaughan, F.R.S., to carry out a nutritional study on force-marched prisoners of war. It ended by her spending three weeks at Belsen concentration camp upon its liberation by the Allies. The horror of what she saw there remained strongly etched in Ros’s memory, and on numerous occasions for the rest of her life she recounted her shock at seeing the inmates and witnessing the painful recovery of the fortunate few. She told her friends that this terrible episode turned her into a heavy smoker, for which she was to pay a high price with her health 25 years later.

She is best remembered for the discovery of the thyroid hormone triiodothyronine, which earned her worldwide recognition. Virtually all her scientific career, although twice interrupted by family events and the World War II, was dedicated to the Medical Research Council. Her attractive personality, wit and generosity meant that she left behind numerous friends and admirers. Despite her success as a scientist, Rosalind remained genuinely modest and retained continued interest in new developments in her area of work and in the careers and problems of those with whom she maintained a close contact until the end.

Died on 14 January 1990 at her home in the village of Hinton St Mary, Dorset.

In March 1945, the Dutch government had appealed for help for the starving population in the north of the Netherlands. The Medical Research Council persuaded British drug manufacturers to produce ‘protein hydrolysates’, amino acids which could be absorbed by the body more rapidly than intact proteins, and sent Janet Vaughan, Rosalind Pitt-Rivers (1907–1900) and Charles Dent (1911–1976) to Brussels to test hydrolysates on returning prisoners of war, but once the full horror of Belsen had been revealed, they were redirected to the northern German camp.