Sarah was born in 1916, the second child of Hanoch and Helen (Sokolower) Eckstein of Warsaw, Poland. With her older brother, Morris (Moshe Zvi), the family moved to North London shortly after the end of the first World War. 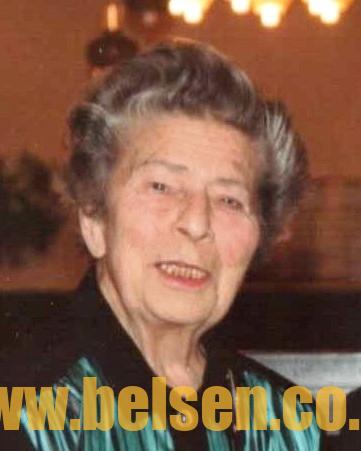 During the London Blitz, she served as a first aid worker and an ARP (air raid precautions) warden, helping to care for the injured and comfort the frightened.

In 1945, Sarah joined the newly formed Jewish Relief Unit. The J.R.U. had been organized by the Jewish community in Britain to help deal with the problems of Jewish survivors from Nazi persecution. After a short training period in England and some orientation in Germany, Sarah was assigned to Bergen-Belsen, where she was appointed team leader.

The site, a former German barracks near to the notorious concentration camp, was designated as a collection and holding centre for displaced persons, survivors of Belsen, former prisoners from the camps in Europe, and other concentration camps. Living conditions were dreadful and the inhabitants, sick and undernourished, still bore the signs of their recent ordeals.

The mission of the J.R.U. team was to provide support and help to reconstruct the shattered lives of those who had lived through the Holocaust. The tasks of the relief unit included organizing and delivering health and social services, arranging for inmates to move to situations where they could reconstruct their lives, and to assist in whatever ways they could in their resettlement. This involved among other activities tracing relatives abroad, reuniting survivor families, arranging for permits to travel to other countries, in particular to Palestine.

Once she was asked, what was your first reaction to what you saw when you arrived at Bergen-Belsen? Her answer was swift and matter-of-fact. “First, I ran outside and threw up. Then I cried a lot. Then I started work, trying to do what was necessary and whatever I could to help. There was so much to do, the problem was where to start.”

The needs were so many. First of all, there were the basics: food, clothes, shelter, health, and a return to sanity and “normal” life. Many needed to have their religious lives restored: prayer books, kosher food, arrangements for religious services and for Holy Days. Teachers were required for the children; rabbis authorized to perform weddings and other ceremonies, and new brides needed something special to wear. Sarah occupied herself with providing these and many other services, bridging the gaps between formal organization and personal concerns. She led the members of the J.R.U. in contributing to the needy whatever food and clothing could be gathered.