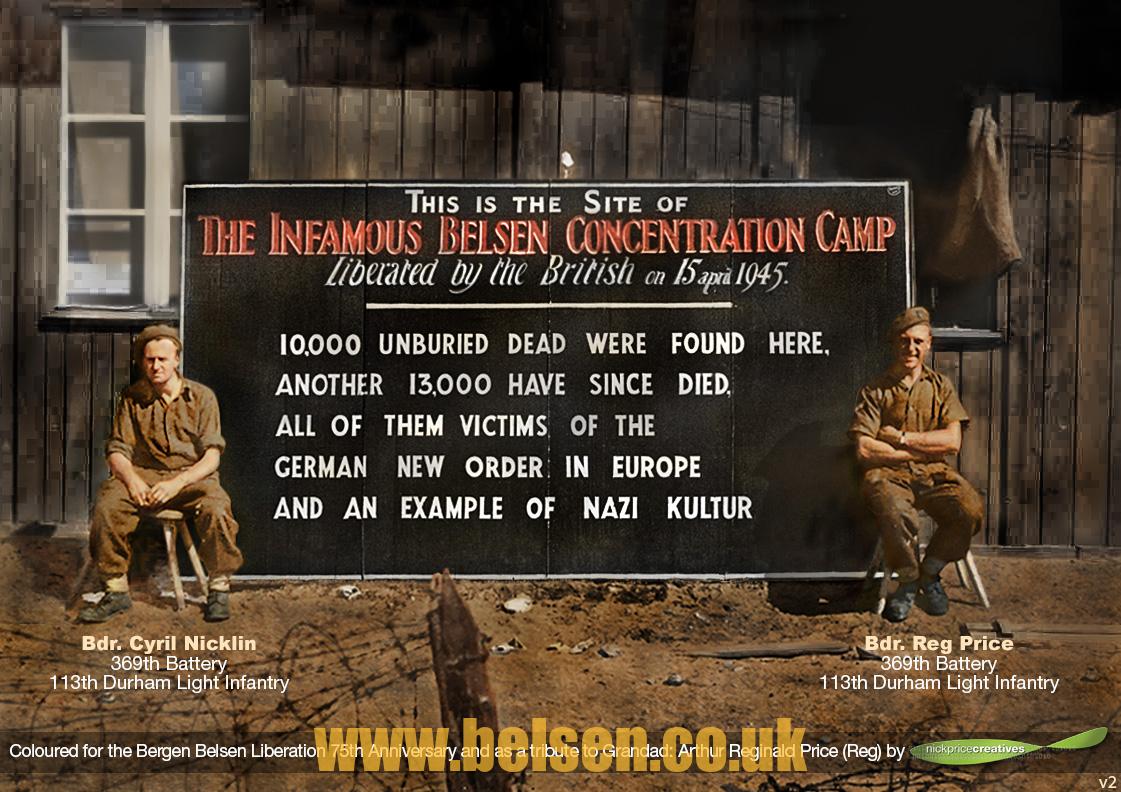 Hello welcome this website section relating to the DLI and the part they played at Belsen Concentration Camp in 1945.

My granddad, Reg Price served with the 113th Durham Light Infantry (Light Anti Aircraft), as part of 369 Battery. As a signwriter, he produced this sign…

In addition, he produced a German text ‘twin,’ all the grave marker signs for all the mass graves and various signage around the newly liberated camp.

And this was kept in the family for years – so for the 75th anniversary of the Liberation of Belsen in 2020, subsequent VE Day and VJ Day, I thought it’s about time I’d try to find out more about Reg – his comrades (many of which are names, simply written on the back of photos), what they did together and for a way to remember them all, properly. So I set up an online archive.
We are now inviting any relatives of service personnel who may have been at the camp to get in touch. We do not believe there are any records of the diverse group of men and women, many completely untrained, who were involved with the camp, after it’s liberation.

Reg’s Story.
The 113th LAA Regiment, receiving orders to proceed to Belsen Concentration Camp, arrived there on 18th April, within 48 hours of the liberation, after covering 238 miles in 24 hours. From that moment, until it left for a rest on the Baltic coast on 24th May, the Regiment, some 900 officers and men, provided the main source of man power for the huge and complex task of relief set the British authorities.

368 Battery were assigned at Walle, 3 miles from the camp. Primarily their job was ‘field work’ this included ‘finding’ as much food, clothing, medical supplies and anything they could find to assist at the camp from any source they could.

370 Battery. Camp 2. Assigned to Ex-Garrison Camp. Their job was prepare the Hospital.

369 Battery, Reg’s battery, was assigned to Camp 1. No-one else, without the highest authority, was allowed in Camp 1. 369 was split into their Troops; A, B and C and given the task of
Food/resources, security and burying the dead. Reg’s Troop was assigned with burying the dead.
Of course, the cine films show the SS guards doing this however Reg said this was purely for the cameras. The SS guards were reluctant to help in anyway, were deliberately slow, often spat at the British soldier pointing a bayonet at them, had no respect for the dead and would return to their rooms, after filming, to bathe, happily singing songs and laughing!  All soldiers were threatened with severe punishment if any ex-SS were harmed. Kramer had two guards 24 hours and day and the two soldiers were told they would be court marshalled if Kramer was killed, by anyone and hung if they killed him!

Reg said it took too many British soldiers off the ‘job to do’ to guard the ex-SS guards. To guard them from escaping and ex-inmates from attacking them. Two SS were shot and killed whilst trying to escape. From official records the SS were transferred to Military Prison in Camp 2 on 25th and left Belsen altogether (to Celle) on the 28th.

Early on, Reg assigned the Wehrmacht who he said were sitting around not doing much to help with his task and some reluctantly helped. He thought it strange at one point that he felt very much alone, as the only British soldier around (as they were spread so thinly throughout the camp) with German soldiers who were still armed, when he wasn’t. There were children near too, one a young blonde haired girl, seemed to stand out and was remarkably healthy used to look out for Reg and tag along to his shirt tails. No-one minded. Such was the task, and such were the conditions in the camp, guns were easily found, with pot-shots taken at anyone, especially those in German uniforms. The whole scene made everyone numb so the occasional close bullet was no issue. Once they were sent back (The Wehrmacht were there as part of the initial truce and later went back to the front line), Reg had some Hungarian troops to help, who wore uniforms similar to the German ones and one soldier was shot and killed. After that the Hungarian Troops were removed from the camp and assigned, armed to other jobs. By 26th April Reg’s troop had buried 8,000.

The Sign at Bergen Belsen Concentration Camp?
Reg produced the Belsen sign. Initially he was given one person to help him and chose Cyril as he wasn’t coping very well with the gruesome task they had been working on the days prior. Who was? I’m sure it was a welcome break for both of them. Reg’s senior officer, Major Murrell was ordered to give Reg a rollickin’ for taking too long with the sign by an American officer. The American Officer with a film crew wanted to get his film and move to Berlin ASAP, as “that’s where the real story was.” Reg said that the sign was important to remember the people who perished there and that the world should know properly – and that it would be “ready when it was ready!” Reg then deliberately spelt a word ‘wrong’ – because he was being rushed! The word – Kultur.
He knew it looked wrong – but in the British language it is actually correct too, in addition to the more common “Culture”. Murrell knew this too, and suggested that the American could read a dictionary whilst he was waiting!!

Reg didn’t get a rollickin but he DID lose his mate helping him (Cyril) and had to produce the German version on his own!! Reg added his trademark palette with two names on the English sign, top right, and his palette and one name: his, on the German one.

Just 113th Durham Light Infantry? No we are interested in all Service and Medical personnel who took part during the humanitarian effort at Belsen Concentration Camp. Their roles and names are largely forgotten, as many were too horrified to ever speak of what they had to do, so this archive seeks to form a tribute to ALL those that were there, to find out more and to remember them.
If you have a relative, or any info, on the relief effort at Belsen, we’d love to you to please get in touch. Email us: liberator@belsen.co.uk – Thank you