Speaking from his armchair in the Hospice in The Weald, former serviceman Fred Brushett introduces himself and his reasons for making the film. He proceeds to recount his memories of being sent, as a 21 year old soldier in the 113 L.A.A. Regiment R.A., to Bergen-Belsen at the time of its liberation from the Nazis. He recalls the sights, sounds and people he encountered with vivid honesty, endeavouring to present the truth to the viewer.

As a British soldier Fred dutifully carried out his orders, but it is clear that his job of creating and filling mass graves and of supervising members of the SS such as Irma Grese, had a profound personal impact. This is obvious when he concludes that his regiment did their job successfully but that his decision not to have children was a direct result of his experiences at the concentration camp. The film, which is interspersed with archive photographs of Bergen-Belsen, ends with a close-up image of Fred standing, rifle in hand, over one of the open mass graves in 1945. 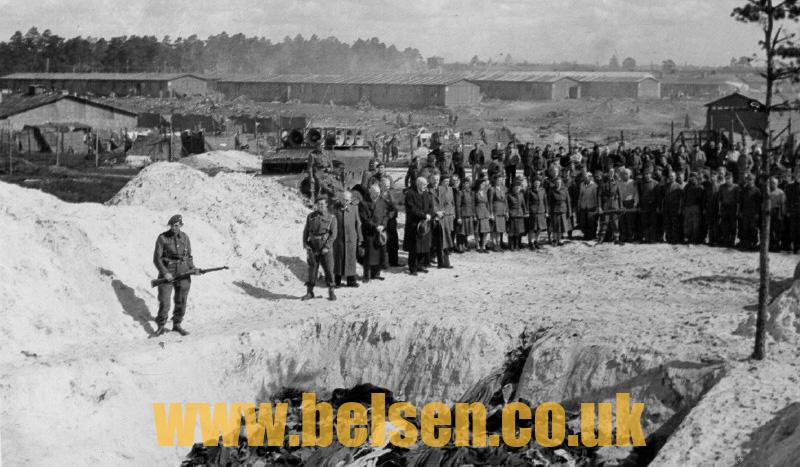 German civilians from Bergen were brought to the camp to witness the Mass Graves. Here the civilians, along with former camp staff stand by Mass Grave 3. Blocks 50, 48, 47, 46, 44, 42 and the Shoe Tent are visible in the background (Fred Brushett stands on the left with his rifle)
Dated: 25 April 1945
Source: Imperial War Museum