We are grateful to Bruce Hitchings MBE BEM, Kirknewton, Scotland and to Bob Shlaer of Santa Fe, New Mexico, for the following story. Last November, Bob read an obituary that appeared in American newspaper, The Week. The deceased was Branko Lustig (87) who, as a 10-year-old Croatian Jew, had been imprisoned at Auschwitz. The obituary describes how one day the youngster was ordered to stand in the front row at a hanging.

The lad watched as seven inmates were brought to the gallows and, moments before the bench was kicked out from under them, shouted in Yiddish, “Remember how we died! Tell the story about us!”

Lustig would do just that. Years after his liberation in 1945, he embarked on a career in film that eventually too him to Hollywood. There, in 1994, he shared the Best Picture Oscar for producing Steven Spielberg’s holocaust epic, Schindler’s List. Lustig died on November 13 in Zagreb, Croatia of heart failure.

Interestingly, Lustig’s obituary contains the following: “When British troops liberated Bergen-Belsen, where he had been transferred form Auschwitz, Lustig heard the sound of bagpipesand concluded he was dead. The music, he recalled thinking, must have been angels playing.”

Lustig retold the story more fully in 2014: “I was very sick. I had typhoid, and then in one moment, I heard music. I hadn’t heard music for a long time. I was delirious, thinking, ‘I’m in heaven finally, and these are angels playing,’ because never before [had] I heard Scottish music, bagpipes, and the British troops entered Bergen-Belsen with bagpipes.”

On April 15, Mr Shlaer played a personal tribute to Branko and his fellow inmates as well as to the liberating British Army. He is recruiting other pipers to do the same next year. However, Mr Shlaer has no idea of who the Army piper, or pipers, might have been back then, and what they perhaps played. He tells us: “I’ve spent a good deal of time doing internet research, but have come up blank. The Imperial War Museums have an archive of oral histories from people who were, many have been transcribed, but nowhere is there a reference to the pipes.

“Lt-Colonel Leonard Berney wrote a book about liberating the camp. He was a member of the General Staff of the British Army XIII Corps, and apparently was the commander on the ground when the British troops entered the camp. … but nowhere in his book is there a mention of piping.

“According to Berney’s account another officer who was there was Lt-Colonel Taylor, the CO of the 63rd Anti-Tank Regiment which was charged with taking over the camp, but about him I can find nothing either.

“Could there be an archive in Scotland relating to the pipers who were assigned to the XIII Corps at the time, and what they might have played on such an occasion?”

What an amazing story on the effect of the bagpipes, and we wonder if there is indeed such an archive or record of those pipers? 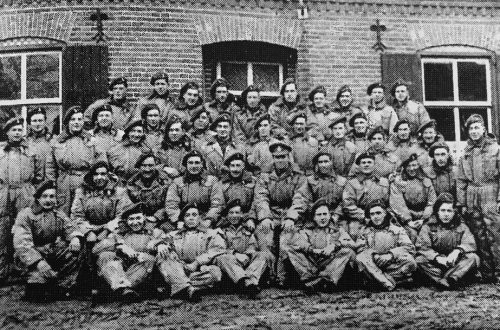