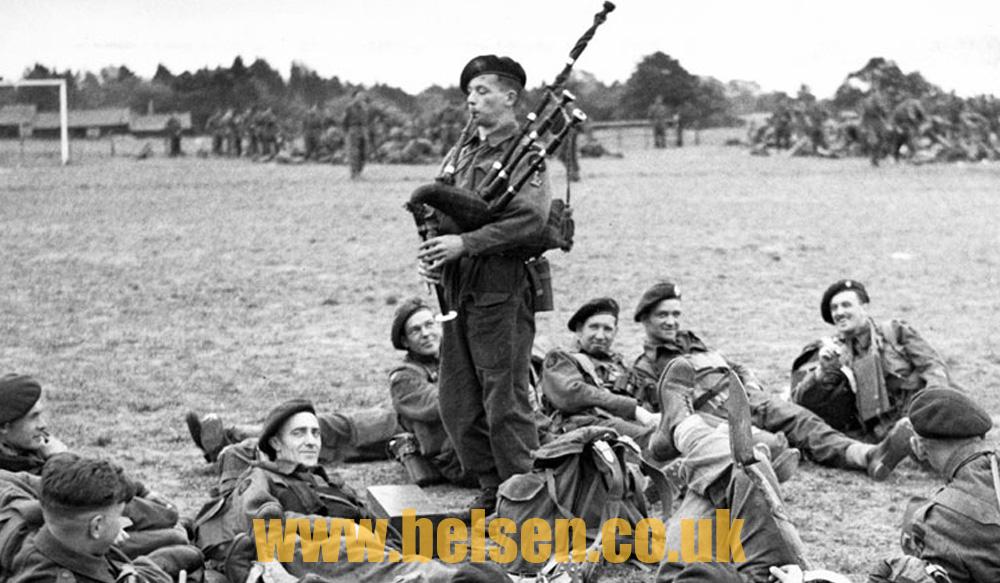 Branko Lustig. As a 12/13 year old, the future producer of Steven Spielberg’s movie ‘Schindler’s List’, was in Bergen-Belsen and on the brink of dying when he all of a sudden heard a sound he thought might have been produced by angels. It was in fact British Army pipers playing as the camp was liberated.

Further to a previous post about Branko Lustig and Mr Shlaer of Santa Fe’s appeal for information, we have received a a few interesting responses so far. David Livingstone writes: “While the textbooks will tell you Bergen-Belsen was liberated by 11 Division, the small print is that 15 Scottish Division (with battalions from virtually every Scottish infantry regiment) passed the gate the same day on their way to capture Celle just down the road, and they provided logistic support to 11 Division in the recovery task. It could have been pipers from any of them that Mr Lustig heard.”

Tom Bruun believes that The Gordon Highlanders were one of the regiments there that day, and that Alex Cupples (1923-2014) was the Pipe Major of the 2nd Battalion at that time. Tom says he is in touch with Alex’s daughter from time to time and recalls her confirming that Alex had been among the British troops that liberated the Bergen-Belsen Concentration Camp in the spring of 1945.

In the early 1970s Alex Cupples moved to Manitoba, Canada.

The following information, however, stopped us in our tracks and sheds new light on an iconic figure of the Second World War:

John Millin, son of the famous D-Day piper, Bill Millin, tells us that his father was also among the soldiers that liberated Bergen-Belsen. He writes: “Very little is written about my father’s war after Normandy. At the end of the Normandy Campaign in August 1944, No. 4 Commando was returned to the UK for rest and preparation for the invasion of Belgium and the Netherlands. After the horrors he witnessed during the fighting in Normandy he was better prepared for the vicious house-to-house fighting through the Netherlands. He was with the 4th Special Services Commando Brigade as they made their way into Germany.

“On April 15th, 1945, British forces had surrounded Bergen-Belsen and taken the German surrender. Dad along with a few other pipers from the Achnacarry band were instructed to play as they led the Commandos into the camp. Nothing could have prepared them for the sights they witnessed inside the camp. The Army Photographic Unit (APU) descended on Belsen to record the cruel and de-humanising treatment inflicted by the Nazi’s on thousands of innocent people, most of whom lay dead and decaying where they fell.

“Dad was put in charge of a burial party tasked to collect all the dead Germans soldiers and have them buried in the local cemetery. Captured German SS men along with civilian Germans from the local village dug the individual graves whilst the murdered inhabitants of Bergen-Belsen were bulldozed into mass graves to prevent further disease. Dad was given a camera by the APU and asked to photograph his daily tasks, one of the undeveloped films made its way into Dad’s kit bag and developed on his return to the UK.

“The photographs from this film were donated to the National Holocaust Museum in Laxton, Nottinghamshire by the Millin family. Dad kept the photos to ensure that the world could never deny the Holocaust.”