Huddersfield soldier Walter Stott was one of the first soldiers to enter Belsen Concentration Camp. His testimony was part of an act of commemoration in Dewsbury on April 15th, 2005 – 60 years after the camp was surrendered to the British. 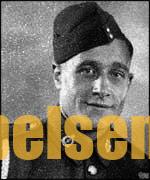 Bergen-Belsen, located on Lünenberg Heath 45 miles south of Hamburg, was the first concentration camp to be liberated by British troops who were not at all prepared for what they found there.

The camp had been created in 1943 to house foreign prisoners but as Allied troops progressed across Europe the Germans transported prisoners from other camps threatened by the advance. By the time the British soldiers arrived at Belsen in 1945 around 60,000 prisoners, mostly Jews, were housed there. The camp authorities had given up on delivering the basic requirements necessary to sustain life resulting in starvation, and dehydration. The crowded conditions meant that typhus, dysentery and tuberculosis were all at epidemic levels in the camp.

“Although we had been fighting, fighting’s different to a concentration camp – terrible.”

Huddersfield soldier Walter Stott, who served in the Royal Engineers, did not have an easy war. Called up at the outbreak of the war in September 1939, he was sent to France with the British Expeditionary Force. He worked on the beaches as a stretcher-bearer during the retreat from Dunkirk, wading out to sea with wounded soldiers and putting them on to the waiting boats. He returned to France in June 1944, landing at Bayeux with the 11th Armoured Division just a few days after D-Day.

Walter Stott’s testimony has been filmed and will be shown during the commemoration event at Dewsbury Museum. In the film Mr Stott remembers some of his reactions when he entered Belsen concentration camp: “I was with the doctors, going round finding the people that we thought would live. We couldn’t get them all ‘cos they were dying in front of us…They had big mounds of potatoes and turnips – there were even bodies around these as they were trying to pinch the turnips and potatoes to eat. And you couldn’t believe anyone could be like that could you? 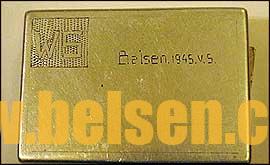 “Irma Grese and Von Kramer, they were the bosses at Belsen. She made two lampshades of human flesh – she were a right one – he got rid of thousands did Hitler and his confederates…We made the SS dig trenches; they piled all the skeletons up and we made them carry all the bodies with their hands. And the town Major stopped us doing it due to disease so we had to use the bulldozers but we didn’t put the earth back – we made them put it back with their hands.”

Manya Stern, who now lives in Salford, was an inmate at Belsen when the British troops arrived. The Dewsbury commemoration will be the first time she has spoken in public about her wartime experiences.

Manya lived with her family in Sosnowiec, Poland until one day in July 1943 when all the Jews in the town were ordered by the Nazis to report to a field to have their ID cards stamped. After three days in the rain, with no shelter, food, drink or change of clothing and surrounded by armed Nazis, the men, women and children were lined up. A Nazi at the head of the queue gestured each left or right and despite her family’s efforts to stay together, they were forcibly separated. She never saw her father, mother, sisters or their children again. Manya was sent first to Graben, a labour camp, where she was forced to do hard labour for 12 hours a day but in November 1944 she was sent to Bergen-Belsen.

At Belsen, there was no food, no water, no beds, no change of clothing and people relieved themselves in a large hole outside in full view of everybody else because there were no toilets. Manya remembers the ‘magical moment’ when British soldiers drove through the camp gates on motorbikes. She remains greatly indebted to the soldiers who liberated the camp, saving the inmates lives. Her brother, who had been sent to Buchenwald, was reunited with her shortly after liberation but did not recognise her – she was a living skeleton. She says: “If they had come just a few days later, I feel I would not have survived.”

For Walter Stott arriving at Belsen was like nothing else he had experienced during the war: “Belsen was a big place and there were thousands in there. I couldn’t believe that anything like this had happened in the world. Although we had been fighting, fighting’s different to a concentration camp – terrible!”