As a very young teenager, an exceptional documentary on the concentration camps had been broadcast one evening on Radio-Canada. It had been shown a on weekday at 11 o’clock at night.

As my mother was hospitalized, I asked my father for permission to watch it. After some thoughts, since my grades and school behaviour were satisfactory, he granted me permission. But there was one condition: he wanted to watch it with me. I thought it might give me a follow-up to what he had told me a few years earlier, so I was happy.

One day he had asked me to go and retrieve a document from his boss. His boss stretching out his arm to get it, his shirt sleeve came up and I saw for the first time his bare forearm. He was angry that I had seen the number tattooed on his arm, he straightened himself up by speaking in Yiddish (which he did when things were not to his liking in the garage…) and lowered his sleeve then handed me an envelope. Not knowing anything about the tattoo and surprised by his reaction, I had talked about it when I got home. And in a language that a ten year old child could understand, my father had told me a little about what it had been like in Europe, some twenty years before, two decades, almost an eternity for me then… He added that I shouldn’t worry about his boss, that he would continue to still love me and that I should just pretend nothing had happened because in his life he had known more than his share of misfortune.

When the night of the broadcast came, my father sat in his rocking chair and left me the more comfortable chair. The ceiling light was turned off and we were sitting in front of the black and white TV screen. And that’s how two memories were engraved in my mind and were always associated. The first memory were the horrifying images of that documentary you should have seen once. They were images of a dirty bulldozer which pushed over a mass of emaciated and disarticulated corpses until they felt into a pit. Exactly as if they were garbage in a landfill. The second memory was about my father who leaned forward at the same time, with his elbows resting on his knees, his hands gathered in front, his feet spread apart and his face dripping with tears. Tears so heavy that they felt to the ground like a heavy spring shower.

When the documentary was over, our emotions were more or less under control. My father asked me soberly what I remembered from all this and if I had any questions. Apart from being convinced that a man as hard to hurt as he was could cry without shame (which I didn’t admit to him because that wasn’t what he wanted to know…), I expressed the small point of view of a teenager with a lot of questions in my mind. Then, I couldn’t help myself and I asked him why he had cried when he saw the scene with the bulldozer. And then he stood up, looked me straight in the eyes and came gently towards me. He simply said: “Because I was there when these images were shot. I was at the Bergen-Belsen camp in Germany, just before the war ended”. I was without words. I was probably so stunned that he opened his arms and told me to come near him. Thirty seconds later, he kissed my head and added: “Now to the beds. Tomorrow is certainly going to be a day when we can both do our best. Tilting his head a little to the side, he said tenderly: “And forward march!”.

Thus ended what was my first evening as an adult. My investigation about what I had seen would continue…

In order to avoid as much as possible to trigger an episode of heart problems (from the 70s onwards, he had experienced several), I never dared to talk about all this with him again afterwards. And time passed as it always does for people who love each other, too quickly…

In September 1984, Ti-Mick, that was my father’s nickname, suffered a devastating heart attack at the age of 63. That’s my age today… The following year, in 1985, I set out to find out what really had happened of my father’s journey in Europe and what it had been like or at least to find out more about it, the wear and tear he had endured. With time I had learned a few things during his lifetime but which seemed to me much more full of holes, than full of solid facts. At the forefront of this quest, it seemed important to me to clarify was the presence of Fusiliers Mont-Royal at the Bergen-Belsen concentration camp in 1945.

Living in Montreal at the time, I went first to visit my father’s brothers-in-arms whom I knew. Gathering here and there some information, especially anecdotes that did not seem to me to be decisive in any way. Nevertheless I had heard that from Holland, the regiment had been so scattered that my interlocutors had only seen “Ti-Mick” again long after his return to rejoin them. Ah, and also my father had specifically forbidden everyone to say anything concerning him, to a son a little too curious for his taste… This convinced me in changing how to search for facts and move forward concretely. Finally, to change my method…

Having no access to sources other than which was available to every researcher, I determined from then on to contact those whom I could logically only learned about the regiment. Well, well, “poor little me”! Then followed a rather hazardous and approximate progression of knowledge, very partial and repetitive, in factual content.

This lasted for years.

I was reading everything that could lay my hand on. There were lots of information that were never really new to me and everything was very fragmented (except for the work of Pierre Vennat, a journalist, I wish here to thank him publicly). There were phone calls and letters to Mr. X or Mrs. Y (people generally polite and promising to help). I had a lot of work to do (but no doubt too busy to follow up on the content), questioning of specialized and distrustful authors, questioning of journalists designated as authorities, questioning of official and salaried historians, which meant that at the best with the (slow) progress of my research, concrete results were only presented in a jagged fashion.

My attempts were not very encouraging, but fortunately sometimes left me with the satisfaction of meeting wonderful. Of course, my insistence, perhaps my obstinacy, often earned me to be classified by my interlocutors as a “constant source of intellectual irritation”. This is why many of them have developed a tendency of keeping out of the way to avoid fatigue. A classification that I still sometimes have retained today. Without being the only one of its kind, probably…

Then one day life brought me to move to Europe. In France to be precise. And then I said to myself that, after all, to find concrete information on a human scale about these events that interested me, perhaps this greater proximity would not be useless? And I was quite right to ask myself this hypothesis as a motivation not to give up. Not to back down. Because since then, without announcing or describing everything, among other things I have found what follows:

a) official archival photos and films from the very rich and enriching Imperial War Museum in London, as well as the very moving Bergen-Belsen Memorial in Germany, where soldiers who appear several times can only be from the Régiment des Fusiliers Mont-Royal. 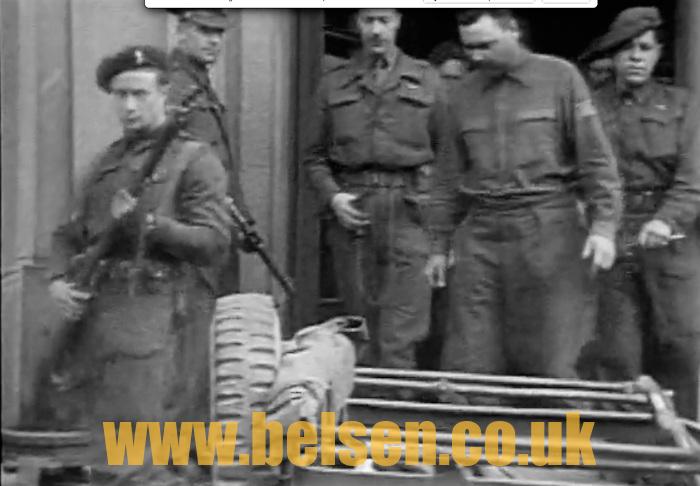 These photos include footage of a convoy of trucks arriving with a number of soldiers clearly wearing a beret with the battalion insignia (a very special grenade), footage of the same type of trucks loaded with Nazi prisoners being transported under strict guard of armed men with the same insignia, and finally, the images that precede and follow the very moving images, presented several times on the Radio-Canada network, of the arrest of Joseph Kramer, head of the Nazi guards, by Montreal soldier Jack Marcovitch of the Royal Canadian Army Corps.

In these “complementary” images, we clearly see other soldiers participating in his arrest, one of whom, in the foreground, is carrying a grenade on his beret. 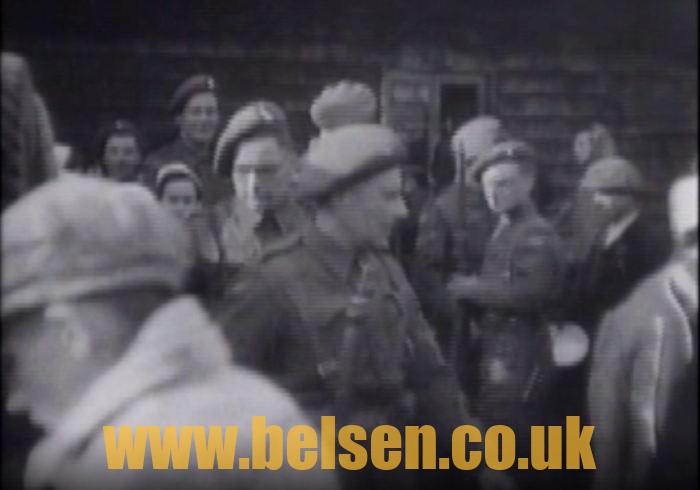 On some sequences, the regimental shoulder badges can be seen, but it would take professional technical image processing work to identify them absolutely.

On other sequences that are chronologically subsequent to these first ones, the uniforms of these men having obviously been changed, there are no longer any fabric shoulder badges. Too bad. Although one can get an accurate picture of all this from these other items we found…

(b) the official list of names of all units which are recognised as having participated in the liberation of the Bergen-Belsen camp by : arrest, surveillance and armed supervision of its guards; by securing the surviving deportees, providing health and sanitary care (general typhus epidemic and others) and progressive re-feeding; by burying tens of thousands of people who died of hunger and/or disease (the remains lying in the open air) and thousands more who died after 15 April (up to 500 deaths per day); by the medical transport of the sick, repatriation and/or emigration of the survivors; by the destruction by fire of these barracks, where, in an attempt to protect themselves from the bad weather and the cold, thousands of deportees were crammed together and finally; by the forced securing of the Nazi guards (men and women) taken prisoner because of a riot and subsequent attempts at lynching (very understandable). The first peculiarity of this list is that only four units have no regimental identifications, all four following each other in the nomenclature by numbers that remain to this day without any known meaning. And which has for second characteristic that none of the mentioned units has a grenade as insignia…

(c) direct testimonies from deportees about the presence among the liberators of many French-speaking Canadian soldiers whose main task (along with others) would have been to disarm, arrest and “supervise” the Nazi officers and guards in the camp and to force them to dispose of the bodies themselves with their bare hands to and inside the pits.

Of these elements, in conclusion, let me be granted a wish. One that all the children and descendants of the Fusiliers Mont-Royal who, at the age of 20, took the risk of enlisting, should seriously explore their memory and the wartime memories of their fathers, uncles or grandfathers. But also of all the “Canayens” who did so in Quebec. Accompanied by our mothers, grandmothers and aunts, for having given us to live in a world that was fairer and much more abundant than the one they lived in, for the stubbornness they showed in order to bring down a dictatorship based not only on inequality in human rights but on the deliberate organization of it, don’t they deserve our “re-recognition”? And therefore, by definition, this knowledge that is always to be sought of what they have done?