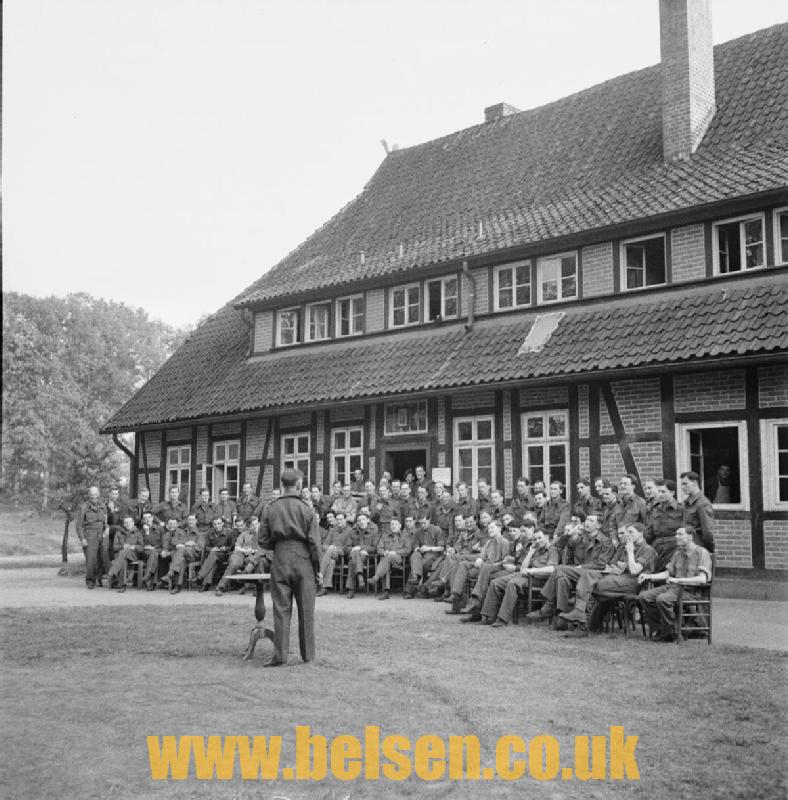 At 23, Edmond Boyd was a privileged, upper-class Cambridge medical student who wanted to be a journalist, but was encouraged into medicine by his father.

When he wasn’t hitting the books, the young man’s life consisted of lounging by the fire with a glass of port, rowing along the Cam River, and courting pretty girls from the right sort of families.

He was a bon vivant without a care in the world. He even scoffed at wartime air raids.

But in April, 1945, as though on a lark with a handful of his buddies, he joined the first wave of liberators at Bergen-Belsen, volunteering around the clock with the Red Cross to save hundreds of sick and dying internees at the notorious Nazi concentration camp in northern Germany.

Over the previous winter, prisoners on death marches from camps in the east, threatened by advancing Soviet troops, were dumped at Belsen. Huts normally accommodating 60 people were suddenly housing 600.

There were 10,000 dead and diseased bodies, many naked and in advanced states of decomposition, lying around the camp, both inside and outside the huts, and requiring immediate burial. The daily death rate was 500.

Belsen was a place of total organizational collapse. The electricity and water supply had failed. Internees were fed a Bengal Famine Diet consisting of powdered milk dissolved in boiling water.

Dr. Boyd arrived a month after Anne Frank and her sister, Margot, had died there of typhus.

He left Belsen after four weeks in an advanced state of typhus himself, reduced to a mere 75 pounds, and spent the next six months convalescing in a London hospital.

While there he wrote The Belsen Diary – a memoir describing the shockingly depraved conditions to which the world was only just awakening.

Although writing became his second vocation, after medicine, and the one into which he poured his passions, he never tried to publish this diary and the bulk of it was discovered only after his death.

After being sprayed with DDT at the gates to the camp – Belsen was rife with typhus, tuberculosis and a wicked brew of other diseases – young Dr. Boyd headed toward his assignment.

“As we swarmed on to the trucks outside the mess and rattled down the road … we seemed like a phalanx of warriors whose efforts would be sure to win the day,” he wrote.

But his first 10 seconds in Hut 14 were enough to banish these thoughts.

He describes riveting scenes of compassion and empathy, and his own attempts to take charge in what was an uncharacteristic way for such a young, inexperienced man.

Was it due to a spoiled upbringing and sense of entitlement – an expectation that his demands be met as though they were an inherited right – or was it necessity?

In one such take-charge moment, Dr. Boyd realized there was a desperate need for more bedpans. He organized a road trip into bombed-out Hamburg, 80 kilometres away, in order to commandeer several hundred of them.

His coterie consisted of a fellow medical student named Michael and a 16-year-old female Polish Jewish internee, Anita, who acted as their interpreter.

After a frustrating search, they arrived at a warehouse with an official chit to pick up the articles, only to be met by a German police officer who said the warehouse was closed for the day.

Dr. Boyd forced his way into the building at gunpoint and packaged up the booty.

“The sound of tin bedpans bouncing about in the back [of the truck] was music to my ears.”

The diary also includes harrowing passages in which he expresses a powerful contempt for the survivors at the camp.

“At times, the ungratefulness and selfishness of these men made me wonder if the whole thing was worthwhile. Each man was out for himself, or his family, there was very little community spirit,” he wrote.

This brutal response by liberators was not uncommon, said Holocaust historian Michael Marrus, author of The Unwanted: European Refugees in the Twentieth Century.

“These camps in the west were not the sight of murder on an industrial scale, the kind of thing that we’ve come to know in the iconography, the gas chambers, people lining up …” he said.

“The people [at Belsen] were so, so in another world, in such horrible condition, that those who liberated them found them extremely difficult to relate to.”

The liberators, he added, would have found Belsen to be a soil of tragic incomprehension.

“However horrified, the liberators often failed to see the victims as fellow creatures. One realized how little horror had to do with sympathy; sympathy demands some common experience.”

In the manner of the Theatre of the Absurd that followed the war little more than a decade later, the still-young Dr. Boyd describes surreal moments that disguise unfathomable hell.

On May 8, VE Day, while doing his rounds among the gravely ill inmates in Hut 14, Dr. Boyd announced that the war was over.

“A cheer went up and I was shaken by the hand, as if I had anything to do with it. The patients in all the huts seemed definitely better that day …”

Midway through his month at the camp, he and his young friends set up a nightclub in the attic of one of the Belsen huts.

“It was a delightful spot, with a dance floor and an army band,” he wrote. “The tables were ammunition cases, and one sat on cushions on the floor.

“Arrangements were already under way for a farewell party. I happened to meet a dance-band leader in one of the numerous offices I visited in Hamburg. He said he would like to bring his band to Belsen, but we could not find accommodation for them in the camp so they never came.

“There were unlimited quantities of neat gin available, and the medical students certainly made the most of this rare opportunity. There were a number of interneed girls there, an odd sight in their varied garments.

These are disturbing and bewildering passages, especially since they appear next to bleak, dire and inconsolable observations about the impact Belsen had on the world and on Dr. Boyd.

“We were hardly the same people as we had been before. For myself, I had forgotten that I was a medical student. I was a relief worker in Belsen and what had gone before did not seem to matter, even the war seemed of little importance.”

Son of an elite Harley Street surgeon, Dr. Sidney Boyd, Edmond was born between the wars to austere parents where affection was absent.

Daddy shouted orders; mommy cowered. And the four children were confined to their quarters or banished to boarding school.

Edmond’s disdain for his father was countered by his devotion to his mother, Violet Evangeline Fox, to whom he wrote weekly letters until she died, beginning when he was sent to Harrow as a little boy.

At the age of 8, Edmond became editor of the school paper and developed a lifelong desire to write, but as the only son of a prosperous medical family, he was expected to follow his father’s impressive lead.

“I never wanted to be a doctor,” Dr. Boyd said, when he was well into his 70s, in an interview for the Muskoka Sun. “I hated medicine.”

Packaging himself among Rolls-Royces, drawing rooms and grand pianos, always on the lookout for quality girlfriends, Edmond easily slid into the Cambridge elite.

His saccharine journals from that time are full of wealthy, youthful escapades and the gloss of grandeur.

And then came Belsen.

And then came life-threatening typhus, followed by the long convalescence during which he attempted to document the state of living horror called Belsen.

No doubt, Belsen shook him to the core, but the closing line of his Belsen diary, written in 1945, included these decidedly myopic, or perhaps hopeful, words:

“Soon I would be back to the life of an ordinary medical student.”

His Belsen diary was packed away in a trunk and life, as planned, resumed.

In 1948, recently graduated from medical school, Dr. Boyd was conscripted into the British navy as ship’s doctor aboard the M.S. Wild Goose, sailing into the Persian Gulf protecting workers in the fledgling oil fields.

Ever the party boy, he was also responsible for the officer’s entertainment and keeping the liquor shelves stocked.

On the banks of the Shatt al-Arab River near Basra in southern Iraq, at a British embassy dinner, he met his future bride, 17-year-old Janice Barnes of Long Beach, Calif.

Over their 60-year marriage, the couple circled the globe five times, visited 56 countries and made a point of touring every island Edmond knew about and could get to.

Such wanderlust suggested Dr. Boyd was always on the lookout for the most effective and far-reaching escapes from Europe’s postwar destruction and traumatic memories.

First stop: New Zealand, in 1950, where he settled for a couple of years in a job with the Wellington Hospital Board and where he and Janice had their first of four children.

In 1952, he moved his family to Canada, at first taking a job as staff doctor at a Chateau Lake Louise in Alberta, then opening a general practice in West Vancouver.

But he was miserable as a practitioner. Less than a decade later, he abandoned examining tables in favour of administrative roles, first with the Canadian Medical Association and later, in Toronto, with the Ontario Hospital Services Commission, a forerunner of OHIP.

As well, he was an associate professor of health administration at the University of Toronto’s School of Hygiene.

“He was a lot happier because he was no longer dealing with people; he was just dealing with social arrangements and planning and secretarial work,” said his daughter, Veronica Boyd.

Dr. Boyd retired from medicine completely when he was only 52. He returned to his first and greater love: writing.

Belsen was rarely mentioned; his diary was never mentioned.

He tried his hand at journalism, including a brief stint as a Globe and Mail columnist in the 1960s, covering controversial issues in a provocative style.

Bizarrely, his greatest writing successes were bodice-ripping romances, along the lines of Harlequin books, penned under the pseudonym Esther Boyd.

Bali Breezes, Precious Pirate and Omen for Love were translated into several languages and sold more than a million copies internationally.

Until Dr. Boyd’s last years in declining health and income, researching these tiny pulp novels fuelled more wanderlust and a reason to travel, sip cocktails with Janice on alluring beaches, and escape into the fantasy of titillating plots. Far, far from the horrors of Belsen.