This month marks the 70th anniversary of Belsen’s liberation and reporter James Marston went to find out more about a Suffolk man who was on the scene. 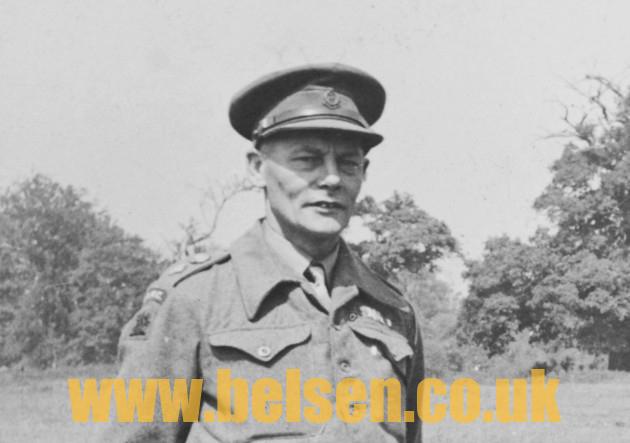 As the Second World War drew to a close the world learned of the full extent of the Holocaust, one of the greatest crimes in the history of mankind.

Millions had perished in the Nazi concentration camp system and Bergen-Belsen, in Germany’s Lower Saxony, was liberated by the British in April 1945.

Footage of the scenes went on to become emblematic of Nazi atrocities.

Ken said: “I joined the Territorial Army when I was 18 in 1961. To us he was simply the colonel. At that time we didn’t know anything of the history of the older men in the unit or where they had served. It wasn’t something that was talked about.”

Ken said Gonin, who was later awarded the Distinguished Service Order (DSO) and Territorial Decoration (TD), joined the Territorial Army before the outbreak of the Second World War.

He said: “Gonin was a doctor and his surgery was on Felixstowe Road. He was a member of 161 (EA) Field Ambulance RAMC. The TA was mobilized on September 1939 and Gonin was later appointed as deputy assistant director of medical services with the 54th division.”

Ken, who went on to serve 30 years in the TA, said as young men he and his comrades knew nothing of the older generation’s role in the war.

He added: “In those days we went to TA one evening a week and various weekends throughout the year. We didn’t know where they had been. When I knew him he was quite elderly but I remember he was a strong influential person. He looked like a typical army officer, tall and thin. I think he was still practicing as a doctor.”

It wasn’t until the early 1970s that Ken began to find out more about Gonin and his history.

He said: “He landed just after D Day and by then he was commanding the 11th Light Field Ambulance. He was involved in the Battle of Normandy before progressing into Northern Germany.

“Gonin led the first full medical unit into Belsen just after the liberation of the camp in April 1945.

“When they arrived conditions were literally atrocious. The dead and dying were everywhere. They stayed there ten weeks looking after the living and disposing of the dead.”

The camp was eventually burned because of the typhus epidemic and louse infestation.

Gonin’s description of the scenes he encountered is held by the Imperial War Museum.

Ken, whose own father was killed in Italy during the Second World War, added: “I think he died in the early 1980s.

“His obituary said: ‘Here (Belsen) he was faced with the almost impossible task of dealing with thousands of sick and dying inmates – and a typhus epidemic.

A task he and his unit performed with outstanding efficiency and success. The horrors and tragedies of this traumatic experience remained with him all his life.’.”

Ken added: “I admired him. I admired what he and all his generation did. It must have had a profound effect on them all which is perhaps why they didn’t talk about their experiences.”

***
Military triage divides battlefield casualties into three categories—those who will inevitably die, those who can be returned to the front and those who will live but will not fight again—and concentrates resources on the lightly wounded while ignoring the dying. Similarly, at Belsen, ‘One had to get used early to the idea that the individual just did not count,’ [Lt. Colonel Mervin] Gonin [the officer commanding the 11th Light Field Ambulance and a general practitioner] recalled. ‘One knew that five hundred a day were dying and that five hundred a day were going on dying for weeks before anything we could do would have the slightest effect. It was, however, not easy to watch a child choking to death from diphtheria when you knew that a tracheotomy and nursing would save it.’
***

Belsen – Lieutenant Colonel M W Gonin DSO TD – Special Order Of The Day:
“I wish to thank all ranks of the 11 Light Field Ambulance and every member of 567 Coy American Field Service Unit who have worked with us so closely, for what you have done since coming to Belsen Concentration Camp on April 17 1945.”

“Our American friends and yourselves have moved over 11,000 sick from Belsen. To do this, 63 of you have worked for a month amid the most unhygienic conditions inside huts where the majority of internees were suffering from the most virulent disease known to man.”

“You have without hesitation, acted as undertakers, collecting over 2,000 corpses from the wards of the hospital area and removing them to the mortuary – as task which the RAMC can never have been asked to fulfil.”

“The cost has not been light: 20 of you contracted typhus- a disease causing great personal suffering. Thank God all patients are doing well.”

“Life can never be quite the same again for those who have worked in the Concentration Camp but you will go with the knowledge that the 11 Lt Fd Amb has once again done a good job.”
Belsen May 1945