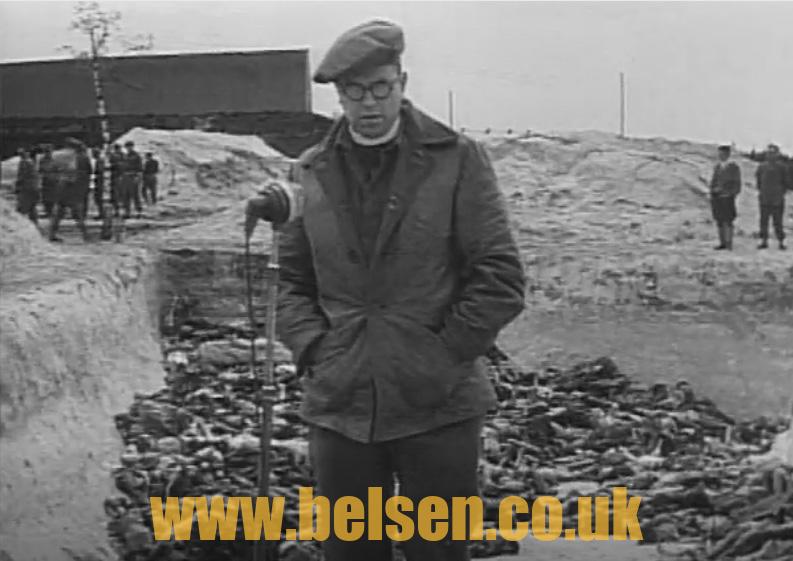 “Reverend T.J. Stretch, attached as padre to the formation concerning this camp. My home is at Fishguard. My parish is at Holy Trinity Church Aberystwyth.”

T. J. Stretch was born in Goodwick, Pembrokeshire in Wales on 17 January 1915; his father was Thomas George Stretch, a dock porter. He attended Fishguard County Secondary School (now Ysgol Bro Gwaun) before commencing studies at St. David’s College, Lampeter in October 1934. He worked as priest at Holy Trinity Church, Aberystwyth and as army chaplain with 10 Garrison Detachment (Military Government). As the first army chaplain to enter Bergen-Belsen, he distributed food and clothing to the survivors, and helped bury 20 000 dead. Following the war, Stretch returned to parochial ministry. He served first at Chatburn, before moving on to Preston and then Poulton le Fylde, Lancashire; he died at Lytham, Lancashire.

Church Times. 18th May, 1945, Stretch wrote:
The scenery here at Belsen is really beautiful; nature is at her best at this time of the year. There are undulating hills and vast pine forests. But these tall trees only serve to hide the hideous doings which occurred in the camps hidden behind them. There are two of them within a mile of each other. No. 2 is bad, but the health of the internees is not in so poor a condition as in No. 1. It can probably be compared with that of slum-dwellers who have had no means of subsistence for many years, and who see no future in their lives. The buildings here are fairly substantial; but there is little typhus as in No. 1, and not so much starvation; so the death-rate is low.

But No. 1 is very different. I have been through it very thoroughly because my unit has now the task of cleaning it up, and eventually, we hope, of burning it to the ground. The first time I went through it, I almost swore to myself that I could not face it again. But slowly one begins to gain confidence, and the daily improvements to be seen helps one on with the gigantic job to be done.

Here there are some sixty thousand people all herded together in huts in different compounds. They lie huddled in three-tier bunks, each hut containing anything from five hundred to a thousand people: those who cannot find bunks lie on the floor. These huts are not large: they measure about a hundred to a hundred and twenty feet long, thirty feet wide, and ten feet high. Try to imagine a building of such dimensions holding so many people.

No Food or Water
This camp has dealt in one commodity in a very large way — that commodity is death. It is the only product. Before our troops liberated it, seventeen thousand people had died or had been killed in the month of March. For three weeks before our arrival the internees had had no food issued to them; for one week no water to wash in or to drink. Have you ever seen people drinking thick, black water from a ditch? Our troops saw it here, and so did I. Have you ever seen people rush at a pig and eat it raw, including its entrails, while it was still alive? That happened within an hour of the arrival of our troops. Have you ever seen people die after eating food because their stomachs could not digest even the smallest quantity? It has occurred here.

Yesterday, I went around the camp with a doctor who commands a hygiene section. We estimated that there were over two thousand bodies lying on ground: there will be more tomorrow. We saw every one of them, except those on the very bottom of the piles. I never thought in my wildest ravings that I should ever bury even one hundred people at the same time. Tomorrow, with a Roman Catholic and a Jewish chaplain, I am burying over four thousand people in a communal grave. By its side there is another, equally large one being dug, and yet another in a different part of the camp. And so it goes on. Every morning another two or three hundred dead are carried from the buildings and laid outside for collection.

Doomed to Die
This morning we found a hut containing over five hundred people, all lying on the ground. About four hundred of them will never get up again. They were dead. Filthy living conditions — really filthy — and starvation diet had seen to this: it will be the fate of hundreds more. People in this condition are beyond the care of all medical science. They cannot be saved. They have been starved systematically; they are walking skeletons. Their bodies and their minds have been broken. They walk like dumb animals, feeling nothing and thinking nothing. Eventually they will lie down to sleep anywhere; they will not rise up again. They will be carried to a grave.

Here is just one example. This morning a girl limped painfully towards me with hands entreatingly outstretched. She muttered something in the Hungarian tongue. I found out that she wanted something to drink, so I spoke to a girl who was with her, and suggested we got some water. She said it was useless because her friend could neither eat nor drink. A spoonful of water would have almost choked her. She was twenty-seven, but looked as if she were fifty. She will be dead in a few days.

In one part of the camp we found about five hundred bodies all piled together. That was an awful sight. But even worse was the spectacle of numbers of people, men and women, sitting by the pile, many within five yards of it. The seemed oblivious to the fact of so many bodies lying in close proximity to them. They had got used to the idea — it had become part of their daily lives. Even worse still was the number of children, all under ten years of age, playing in the same spot. They were also behind the barbed wire fences, and treated in the same way as the adults. They lived and they died in the same manner.

This camp has no sanitation. Each hut had one lavatory, but each one had ceased to work long ago. The Germans did not think of making alternative arrangements. As far as they were concerned, they treated the internees as beasts, and from their point of view they could behave as beasts. To their minds it was humorous to see human beings slowly descend the ladder of civilization.

Who Are They?
And who are these people who have suffered so much? We don’t know; nobody knows. They have a number tattooed on their arms, but it does not correspond to any name because all the records have been destroyed. The dead cannot answer questions, and the “living dead” cannot understand them. And their crimes? Some, including Germans, listened to foreign broadcasts; others spoke against the State or against Hitler — it amounts to the same thing — some were underground workers in occupied countries; others belonged to different races or creeds: they were Poles or Jews. One woman of forty-five, who could speak many languages, including perfect English, was there because her mother had a strain of Jewish blood in her veins. Another girl who spoke to me had been there for six months; she had been in another camp for six months, and before that in prison for one year. She is twenty-one now. Her crime was simply that she was a Pole. They are typical of thousands of men and women. When they entered No. 1, they knew they had come to die. A few minutes in the camp, surrounded by walking skeletons, was enough to tell them that. They saw so many people lie down to sleep and never rise again, that they knew that one day they would be like that.

Many have been saved from that fate. Many, many thousands will go out, eventually healed in body. I could never predict what will happen to their minds. They can never forget — that is impossible. Some have experienced this life for years, and the thoughts cannot be blotted out. I have known the life from outside for a few days, and the sight of it all will live with me for ever.

Restoring Human Values
But we are thankful that so many are beginning to behave like human beings again. That is a hard thing to say, but it is very true. They are getting a little of their self-respect back. Those who have the strength are beginning to wash themselves again, for they now have running water. Some are even washing their clothes. They are beginning to use our sanitary arrangements. Yesterday I talked with some Czech girls, and said that we were trying to get hot shower-baths working. They could not believe it. Not running water? Never. They had not been allowed to bath since they left their homes — that was five years ago. The eldest of the girls was twenty-four. Now the showers are working: in fact, they are never idle, for there is a continual queue for that long lost privilege.

I could go on writing, but what I have said will give you a little idea of Belsen. Yet some internees say it is not the worst camp by any stretch of the imagination. It was the Germans who ran this camp and many more like it — German S.S. men with an S.S. commandant. They loved their job, and gloated over the sufferings they saw. It was food and drink to them. There were German women to run the female part of the camp. I have seen them — stony-faced, hard, and tough women. At times they were even more vicious and diabolical than the S.S. men. Somebody christened them the “Brides of Hell”.

All I have written about I have seen. And what I have seen, I shall never forget — never!

The Revd T. J. (Jim or “Banger”) Stretch, a Welshman who trained for the priesthood at Lampeter, carried his memories of Belsen with him to Lancashire when he became Vicar of St Chad’s, Poulton-le-Fylde. There, he beautified and reconstructed the Georgian church, according to an article by a special correspondent on the Church in Blackpool (3 August 1956). Fr Stretch died suddenly in his fifties, c.1972, while playing golf. He was described by Canon Donald Gray, after this Belsen article had been referred to in the Portugal Street Diary column (17 May 1985), as “a splendid and good priest” (PSD, 31 May 1985).