For nothing could have prepared them as they liberated the Bergen-Belsen concentration camp in April 1945. 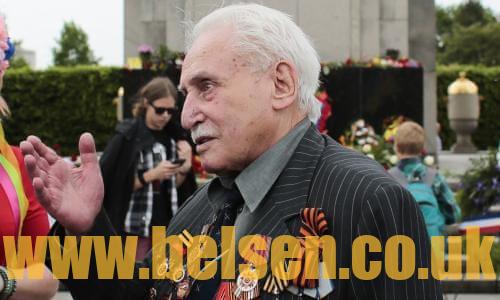 “When we moved into Belsen all we could see was thousands of bodies lying all over the place,” said Lieutenant Colonel Douglas Paybody.

“We couldn’t tell the living from the dead.

“If ever we had doubted the evil we were fighting, we knew what evil was after Belsen.

“It is something my generation can’t really forget.”

On Saturday, Colonel Paybody, now 83, was among the thousands marking Holocaust Memorial Day.

About 16 million people, mainly Jews, were exterminated in Nazi death camps during the Second World War.

“The memorial day should be continued every year,” said Colonel Paybody, of Chelford Road, Knutsford.

“In this materialistic society the terrible things that happened to millions should be known and remembered.”

The ‘indescribable suffering’ he witnessed during two days at Bergen-Belsen 56 years ago are etched indelibly on his mind.

For years – long after the war ended – he still suffered nightmares.

“The worst nightmare you could imagine couldn’t compare to Belsen,” he said.

“Those people endured simply because of who they were. They were systematically exterminated for being Jewish.”

Colonel Paybody, MBE, was just 26 when he moved into Bergen-Belsen with 100,000 troops.

Members of the Wehrmacht had met the British troops on the road and alerted them that a concentration camp was ahead.

The Germans had been appalled at what they had seen and at what the SS were doing at Belsen, and had agreed to negotiate the liberation of the camp.

“The written word is inadequate to describe the conditions we found,” he said.

Bergen-Belsen was unlike the Polish death camp Auschwitz.

There were no gas chambers or ovens.

Instead, the inmates died of starvation or typhoid that was rife in the camp.

“It was beyond belief,” he said. “Quite indescribable.

“The stench got into your clothes, your hair, your ears and your mouth.

“You could empty water over yourselves but it took ages to get rid of the smell.” Colonel Paybody and the soldiers stayed at the camp for two days.

“We did what we could for the living and bulldozed mass graves for the dead,” he said.

The graves were the size of cricket pitches.

Then they left the Red Cross to take over the running of the camp.

“We had to get on with our job to meet the Russians and carve Germany in two,” he said.

“But leaving Belsen pushed us on with greater urgency. We were fighting a crusade.

“If ever we had doubted the evil we were fighting, we knew what evil was after Belsen.”

Colonel Paybody learned after the war that just two weeks before he arrived at Bergen-Belsen, Anne Frank had died at the camp. “I sometimes wonder what would have happened if we had got there earlier,” he said.

“It’s hard. It isn’t that I’ve tried to forget. I have just avoided things that will make me remember.

“I saw it all in 3D. It will never disappear and is etched in my mind for life.”

After the war Colonel Paybody travelled extensively around the world as director of a number of International companies.

In 1995 he was asked to address the 50th Commemoration of the Holocaust at Manchester Town Hall in front of a Jewish audience.

His moving speech was videotaped and sent to Hollywood director Steven Spielberg in Los Angeles.

The director of Schindler’s List contacted Colonel Paybody to ask him to be part of a remembrance campaign.

Shoah Project is a compilation of witness accounts of the Holocaust which is available in schools and libraries around the world.

“I am not a survivor of the Holocaust but as someone who came in from outside, with fresh Christian eyes, I gave a new perspective,” said Colonel Paybody.

“What we saw was a nightmare which beggars description. Nobody should be allowed to see the things we saw: thousands of bodies lying all over the place. Excrement everywhere. The stench got into your clothes, your hair, your ears and your mouth. You could empty water over yourselves, but it took ages to get rid of the smell.

It’s often assumed that liberation means people celebrating and coming to hug you, but they were too far gone. They would just sit and rock back and forth. As you watched you saw one die in front of you. Three hundred were dying every day, I think. So often, one could not tell the emaciated living from the dead. We stayed for two days doing what we could for the living and bulldozing mass graves for the dead. If we ever doubted the evil we were fighting, when we saw Belsen we knew just how evil it was.”
Lt-Col Douglas Paybody

PAYBODY J.Douglas.Lt.Col,MBE,FCA Died peacefully in Macclesfield Hospital on March 17th 2010 aged 92, following a short illness. Now reunited with his dearest wife Vera, he will be sorely missed by his sons, Stephen and Adrian, grandsons James and Duncan, and all his family and many friends.