My father, Syd, never talked that much about his wartime service with the RAF Regiment but occasionally reminisced about his mates, guard duties at the War Ministry in London, making friends with the mayor of a Belgian town, always the lighthearted side of wartime exploits. 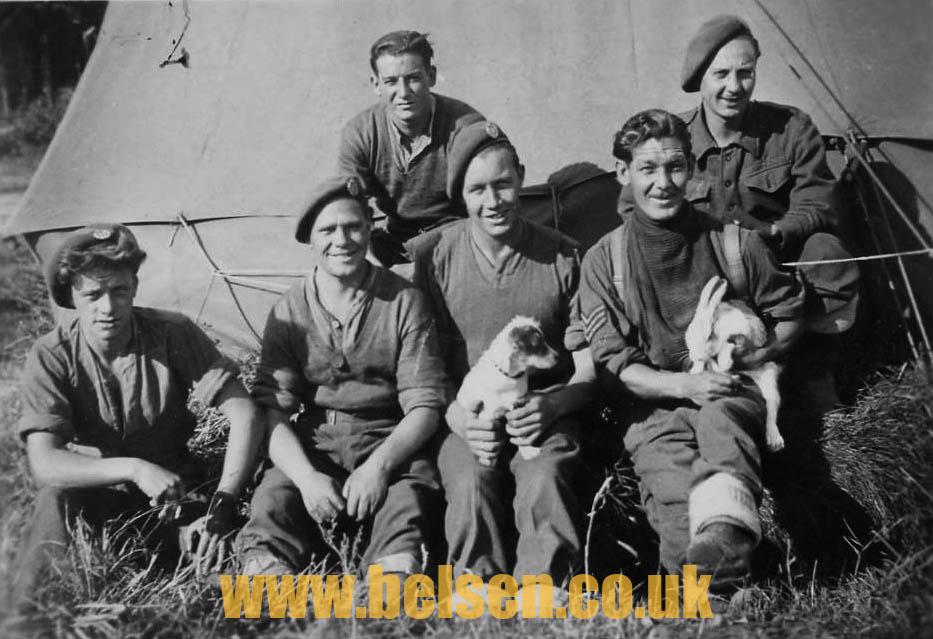 However toward the end of his life he suddenly divulged that he was present at the liberation of the concentration camp Bergen-Belsen. It was one of the rare occasions I saw my father cry – the memories too painful to put into words. Most accounts of that liberation do not mention The RAF role. The following first hand account was written by someone else present at that awful time.

My first encounter with Belsen was the sight of dead bodies hanging from the electric fences. These victims had thrown themselves on the fences to end their own unimaginable suffering. The camp authorities had left them where they died. It was May 1945. The Allied and Russian armies were battling to link up in central Germany; Field Marshal Montgomery led his 21st Army Group to Lüneburg, with our RAF Regiment Wing in close support.

On arrival at Tactical Headquarters, we had been briefed on the discovery of the Belsen prison camp nearby. In company with our RAF medical unit and the two 2nd Army Field hospitals, we wasted no time. Briefed though we were, the shock excelled all the horrors of the battles of the 12 months since Normandy.

As we passed through the camp gates, the Royal Military Police requested us to drive very slowly to avoid the numerous disoriented prisoners. We were handed adhesive tape to put over the vehicle horns in order to prevent them going off accidentally, lest the shock would cause still more deaths.
The British liberators were staggered and shocked by the inhuman behaviour of some of the former guards, who continued to abuse and torment prisoners nearing death when they assumed we were looking the other way. I confess that on such occasions I may have breached the Geneva Convention to prevent further ill treatment of helpless victims. Their behaviour after we had arrived contradicted the excuse that the SS had forced them to carry out orders. Our new orders to them were “Stop acting like savages”.

The most moving experience came on the second morning as I was walking from what had been the luxury SS barracks which our troops had transformed into a hospital. My attention was drawn to two packing cases covered by a worn red curtain. A young Polish priest was clinging to this makeshift altar with one hand, while celebrating Mass. Between his feet lay the body of another priest who probably died during the night. No one had had the energy to move the body.

I had no difficulty in following the old Latin Mass, having been educated at St James’s Roman Catholic School in County Antrim, and, although an Anglican, I had gained a working knowledge of all the rituals. Still supporting himself against the altar, the young priest did his best to distribute the consecrated elements. Some recipients were able to stumble over the rough, scrubby heathland. Others crawled forward to receive the tokens and then crawled back to share them with others unable to move. Some almost certainly passed on to another – probably better – world before sunset. Whatever one’s race or religion one can only be uplifted and impressed by that truly remarkable proof of the ultimate triumph of good over evil.

My duties in Belsen were cut short by orders to cross the River Elbe and proceed with haste over the Kiel Canal to Flensberg on the German–Danish frontier. Some days later, before the war ended, we were informed that, before Hitler committed suicide, he had appointed Grand Admiral Doenitz as his successor. By coincidence, we and Doenitz arrived in Flensberg on the same day. We had some difficulty in persuading the Grand Admiral that he was now unemployed. 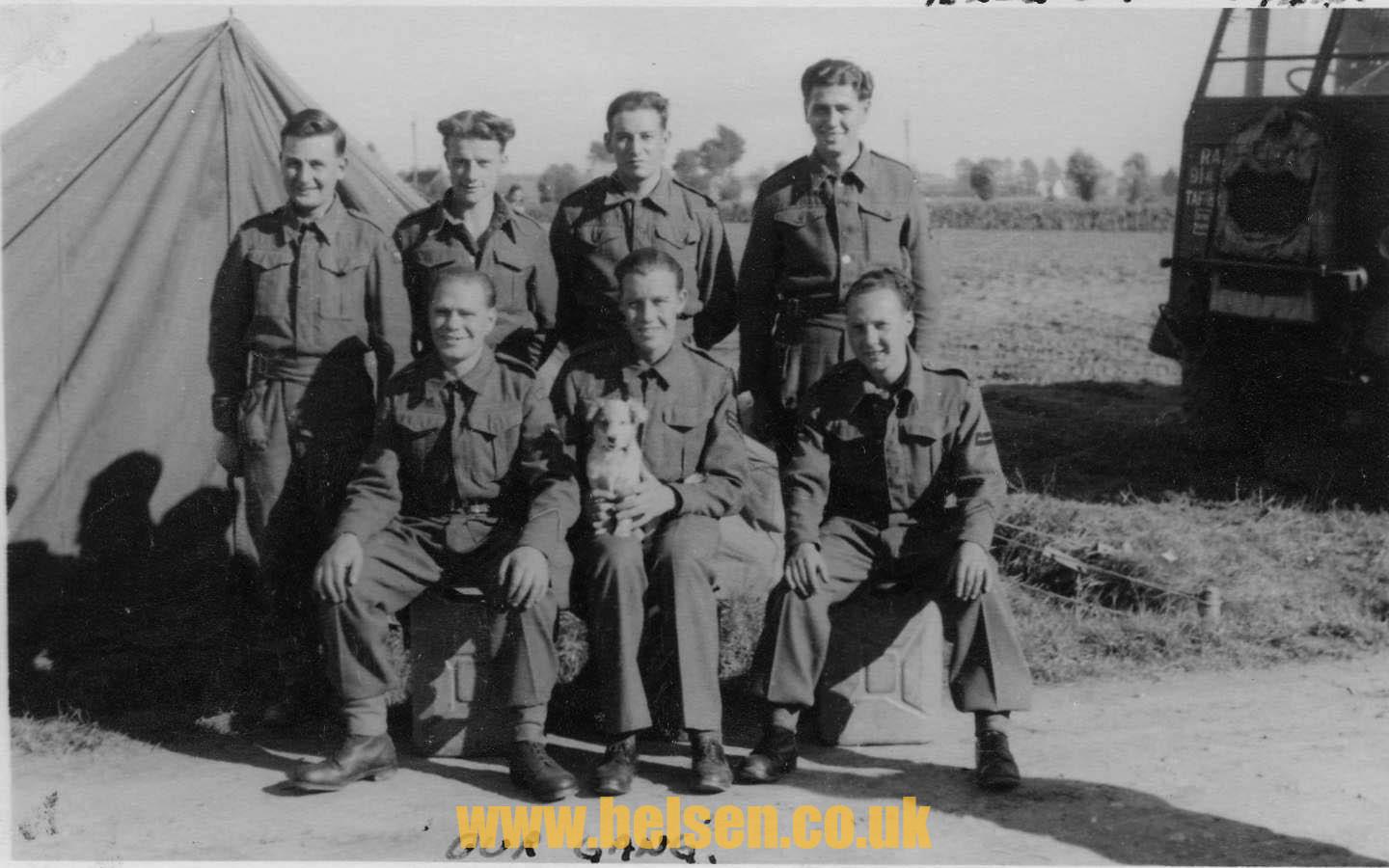 We then turned to our special mission which was to accept the surrender of about 9,000 Luftwaffe personnel who had fled from the Eastern Front along with their experimental jets. But the Belsen we had left was still very much in our minds when we discovered that we had in our net the mass murderer Himmler and his hard men. Although Himmler committed suicide, his subordinates, when arrested, were consigned to the Nuremberg war trials. Regrettably, those events came too late to relieve the agonies of those who suffered in Belsen and the other death camps.

My mind has often gone back to our arrival in Belsen as I stood beside my commanding officer, a First World War pilot and a man of great integrity. Before us was a huge mound of bodies near the Jewish quarter of the dreadful huts. My CO asked: “Molyneaux, did you ever think you would see such an example of what one group of human beings could do to another set of human beings?” I innocently replied: “Perhaps this evidence will ensure that it doesn’t happen again.”

Shaking his head, my CO said: “I hate to think you may be mistaken.”
I now admit that I was wrong because I didn’t realise that the rewards of tyranny and terrorism would be so great, and that therefore authorities and governments would lack the courage and resolution to stamp out such evils.

Now, the usual response of governments is mere condemnation of an atrocity, describing an outrage as “unacceptable”. Next come a string of concessions to the offender, leading to a craven suggestion that the victims must share some of the blame, and then concessions to the demands of the perpetrators.

Increasingly, the general public weakens in its resolve. Under the label of moderation, it is fashionable to plead for understanding; to do a Chamberlain and settle for a piece of crumpled paper in the mistaken belief that the word of dictators and terrorists can be trusted. Today, we should reflect on our responsibilities, and those of our governments, to stand up to the prejudice and tyranny that can still, today, lead to genocide. These events happened in my lifetime. They are not lost in the past; they could still happen again today.