Belsen (officially Bergen-Belsen) concentration camp was set up in 1940, located in modern Lower Saxony, Germany. Until 1943 the camp served exclusively as a Prisoner of War (POW) camp. In April 1943 the German Schutzstaffel (SS) took over a portion of Bergen-Belsen and converted it first into a civilian residence camp and, later, into a concentration camp. Whilst Bergen-Belsen contained no gas chambers, an estimated 50,000 people died of starvation, overwork, disease, brutality and medical experiments.

When the German Army retreated in late 1944 and early 1945, prisoners from other concentration camps were sent to Belsen. Camp facilities were unable to cope with such a large influx of new prisoners and the conditions deteriorated rapidly. The camp was the site of a large Typhus outbreak, resulting in the deaths of thousands of prisoners.

Members of the British Royal Artillery 63rd Anti-Tank Regiment liberated Belsen on 15 April, 1945, and arrested its commandant, Josef Kramer. The British found around sixty thousand prisoners in the camp, most of them seriously ill. Thousands of corpses lay unburied on the camp grounds. Between May 1943 and 15 April 1945, between 36,400 and 37,600 prisoners died in Bergen-Belsen. More than 13,000 former prisoners, too ill to recover, died after liberation. After evacuating Belsen, British forces burned down the whole camp to prevent the spread of Typhus. 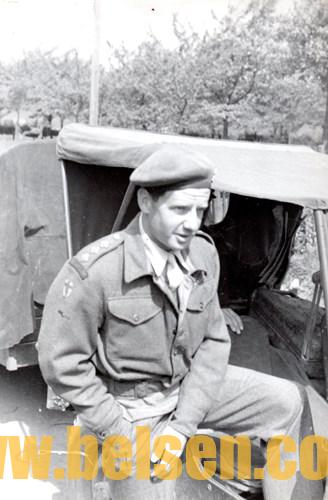 Many British units were involved in the initial liberation and relief effort of Bergen-Belsen. 658 Air Observation Post (AOP) Squadron flew their Auster light aircraft over the camp. They took aerial photographs of the site and its prisoners to document the layout. The Squadron also assisted in transporting personnel into the area. Captain N.J. Murray DFC flew Brigadier H.L. Glyn-Hughes to the camp and saw first-hand the conditions of the camp. It was Brigadier Glyn-Hughes, Deputy Director of Medical Services of the Second Army, who co-ordinated the relief effort for the liberated prisoners.